One of the most exciting things I ever put together was an April Fool's Day joke in 2003, in which we pretended to flip the format of the radio station 95.5 WBRU in Providence. At the time, a format called "Jack" was sweeping the industry, which billed itself as "like your iPod on shuffle" and played a random assortment of hits. We named our new station 'Buddy-FM' after Providence's legendary former mayor, and played everything from Ace of Base to Twisted Sister. The more jarring the transition between songs, the better.

We then proceeded to stage a break-in and recapturing of the radio station by our airstaff, complete with an angry mob in the background and a tussle with security guards. We even got rock stars like Dicky Barrett of the Mighty Mighty Bosstones in on the joke. In the end, local rock club owner Rich Lupo pretended to collect money to purchase the station and return it to its original format. We went back to normal without ever revealing the joke on air.

The joke made a lot of waves in the state. Our format flip was the lead story on the local news station one night (I cringed when I saw the promo spot during ER). The Providence Journal ran a big article on it after the fact. Here's some of the audio from that joke: 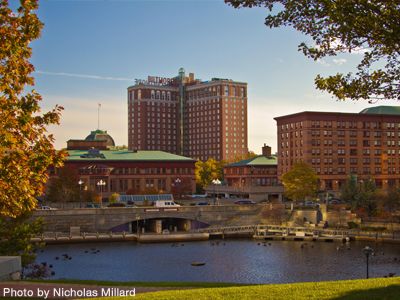