Discover the Secrets of Natural Sea Salt from Gloucester, Massachusetts

See how Atlantic Saltworks goes back to basics with their all-natural and local salt in historic maritime Gloucester, Massachusetts.

The Taste Trekkers Food & Travel Expo was made possible by a Kickstarter campaign. We like to give back by highlighting other great food and travel Kickstarter projects. Heather Ahearn and Alison Legor Darnell are both graduates of UMass-Amherst and the F.W. Olin School of Business at Babson College. Together, they have launched a Kickstarter campaign to raise money for a new sea salt plant.

Atlantic Saltworks is different than commercial salts and even other small-batch sea salts for a few reasons!

First, most commercial salts have bleach and anti-caking agents in them. We don’t. We don’t add anything and we don’t take anything away – Atlantic Saltworks is pure sea salt! Also, our flagship product is a flake finishing salt.

Many other artisan sea salts are solar evaporated in greenhouses. This method produces crystals best suited for a grinder. We employ a different traditional method, and apply a man-made heat throughout the process. The result is very delicate flake that doesn’t require a grinder. You just simply need to take a small pinch in your fingers and spread over most any food. It really makes flavors pop!

We tested out many spots along the North Shore of Massachusetts, and we decided Gloucester’s water made the best tasting salt – plain and simple.

In addition, the history and story surrounding the city itself is also uniquely salty: Gloucester is America’s oldest fishing port and was once the world’s largest. Its main export for centuries was salted fish, but the invention of refrigeration in the early 20th Century eliminated the need to preserve fish with salt.

We hope reintroducing salt in the 21st century will play a small part in helping support and define the next chapter in Gloucester’s unique maritime history. Quite frankly, we think that’s pretty cool. And, from city leadership to excited customers, the city of Gloucester has collectively been our largest support, and for that we are very grateful.

RELATED: How well do you know the Boston food scene? Take our quiz and find out!

3. How did you start producing salt?

One afternoon last summer, as we returned from the farmers market with dinner, we realized everything we were about to eat was all-natural and local, except for the salt. So, we marched across the street, straight into the harbor and got a gallon of seawater to boil it down.

Even though our knowledge of basic chemistry told us seawater would yield salt, we couldn’t believe it as we watched the water evaporate and salt appear. It was like MAGIC! Atlantic Saltworks was born right then and there, and our lives as “saltrepreneurs” began. It is our passion and we have been obsessed ever since.

4. Tell us something most people do not know about salt.

Well, we could go on for days with fun salt facts, but here are a few to get everyone started!

First, from a health perspective, although small-batch and commercial salts have the same amount of sodium, you can use less of our salt because it has a very strong, clean, briny taste. On the other hand, the actual salty taste of commercial salts is somewhat masked, and most have a slightly bitter and sometimes chemical-y flavor due to the added bleach and anti-caking agents.

RELATED: Check out these 5 unique bars to have a drink at in Boston

5. How does water quality affect the salt production?

Of course we want to use clean water so we harvest our water from a remote location, and we also get our water tested just be sure it is as clean as it can be.

What really affects the production and more importantly, taste, is the location of the water and the corresponding natural trace minerals that are present. Taste varies greatly depending on where the water is harvested – even water only separated by a few miles can have a very different flavor profile. We tested many spots that all yielded salt that tasted good, but our palates really liked the salt that came from Gloucester waters the best.

What is the name of the Boston neighborhood known for its Italian cuisine? 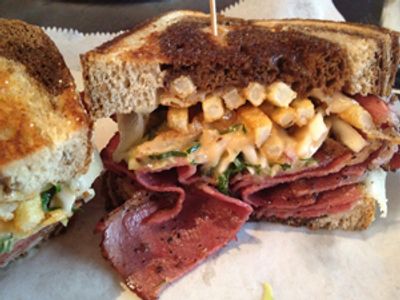