We kicked of 2011 with our hottest Mystery Meet yet - literally! We journeyed to East Coast Grill in Inman Square for one of their legendary Hell Nights. After signing our souls away, we played Russian Roulette with spicy meatballs, gobbled up the Wings of Mass Destruction, and choked back tears as we sucked down Inner Beauty Hot Sauce. Most of us survived.

We kicked off 2011 with our hottest Mystery Meet yet - literally! The 25-year-strong East Coast Grill, Chris Schlesinger's BBQ joint in Inman Square that won The Boston Globe's 2010 Munch Madness competition, is known for its legendary Hell Nights. These spicy evenings typically sell out in minutes.

East Coast Grill recently made their Hell Night menu available to private parties, so, on the eve of a massive snowstorm, we gathered nearly 30 foodies to make the trek thru Hell.

Hell Night begins with a ritual known as the Russian Roulette Style Spicy Meatball Challenge. Everybody at the table receives a meatball. Some are extremely hot; some are not. But there's only one way to find out. Your humble host found himself on the losing end of the toothpick.

The Meatball was followed by a number of appetizers served family-style, ranging in heat.

The appetizers were followed by our choice of entrees: the spicy Jamaican Jerk Grilled Pork Chop or the more subdued Latin Spice Grilled Mahi Mahi.

We had a number of brave bloggers in the house: Rachel from Fork it Over, Boston!, Bianca from Confessions of a Chocaholic, Amanda from Tales from a Kitchen Misfit, Jacki from Just Add Cheese, Nicole from I am a Honeybee, Tracey from 40-Something Life, and Frank from The Earnest Life. Special thanks to Robin and Jess from East Coast Grill for making our seventh Mystery Meet such a memorable event. 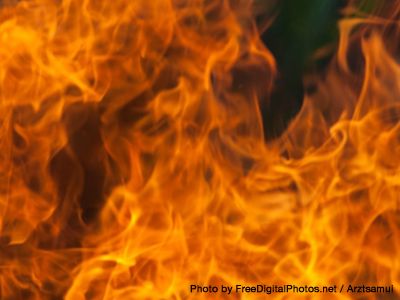 Which Cambridge restaurant hosts "Hell Night," when it rates the spiciness of its dishes on a scale from one to ten bombs?