Get the low-down on Betony Restaurant in New York City, a finalist for the Best New Restaurant 2014.

Betony Executive Chef Bryce Shuman grew up in Chapel Hill, North Carolina and from a young age was exposed to high-quality food. His mother, a cultural anthropologist with a degree in nutrition, was an ambitious cook who insisted he help out in the kitchen and step up to the plate to recreate dishes such as his dad’s revered puttanesca recipe. When the family lived abroad for long stretches in places as diverse as the jungles of Costa Rica and the Arctic as part of his mother’s anthropological research, they would eat local, which is how Bryce tried raw caribou and seal at an age when his peers were embracing Fruit Loops.

Bryce’s hospitality career started modestly enough in 2001, as a dishwasher at Mesh Café in Greenville, North Carolina, where he was quickly promoted to chef de cuisine. It was at Mesh that he met a waitress, Jen, who would later become his wife. In 2003 he moved to San Francisco to enroll in the California Culinary Academy (CCA), while working nights on the line at Wolfgang Puck’s Postrio. There, Bryce met chef Jack Yoss, an early mentor, who taught him many kitchen skills, including how to man a giant charcoal grill, which became his favorite station.

After graduation, Bryce went to work at Rubicon in San Francisco, where he credits then Executive Chef Stuart Brioza and his wife, Pastry Chef Nicole Krasinski, for being exemplary leaders. Stuart completely debunked the stereotype of the great chef as screaming madman, calmly and patiently teaching Bryce how to break down a whole snapper or make consommé, skills that can only really be learned on the job through repeated trial and error. Stuart also ignited Bryce’s passion for the farmers market and local cuisine. Nicole, an equally bright light, showed Bryce how to gracefully blur the lines between salty and sweet, and how to maintain a sunny outlook in the midst of a stressful service. Upon returning from a long trip to Europe to work and dine in top restaurants, Bryce moved back to the East Coast in 2007. After trailing at a number of elite NYC restaurants, Bryce settled on Eleven Madison Park based on Chef Daniel Humm’s leadership and the kitchen’s dynamic atmosphere.

At Eleven Madison Park, Bryce worked alongiside Chef Humm for six years, and credits him for pushing him harder than anyone to achieve his full potential. Over the course of his time there, Bryce worked every station and every Sous Chef position and was eventually promoted to Executive Sous Chef. He worked beside Chef Humm when the restaurant garnered a four-star review from The New York Times, three-star review from Michelin, and was ranked 10th in San Pellegrino’s guide to The World’s 50 Best Restaurants, among many other accolades. Bryce also accompanied Chef Humm on trips abroad to collaborate with other chefs and was responsible for the testing and editing of the recipes in Offer: B009QJMXGU In May 2013, Bryce opened Betony with fellow former Eleven Madison Park colleague, Eamon Rockey (General Manager). At Betony, Bryce’s menu is inspired by familiar flavors of food he loves presented in a distinctly modern way. Since opening, Betony has been the recipient of great critical acclaim, garnering three stars in The New York Times and Esquire’s “Restaurant of the Year” for 2013. When not at Betony, Bryce enjoys playing blues guitar, snapping photos with his Polaroid Reporter SE, visiting art galleries with his wife, and annoying his cats.

General Manager Eamon Rockey grew up in the small town of Hattiesburg, Mississippi, the son of two professional chefs. Eamon’s parents encouraged him to get into the kitchen at a young age, and at 14 he started working after school at Sakura, at the time Hattiesburg’s only sushi restaurant.

In 2003, Eamon enrolled at the Culinary Institute of America in Hyde Park, New York. He anticipated graduating as a cook, but a wine course sparked his interest in the service side of the industry and his career goals shifted to that area. Upon graduation, Eamon moved to New York City to gain fine dining experience, and was hired at Gilt, a Michelin-starred New American restaurant. A desire to further develop his fine dining experience led Eamon to look into new job opportunities, and in 2007, he joined the service team at Eleven Madison Park. During his time at the restaurant, he learned a tremendous amount about wine service and was quickly promoted to bartender and captain. Eamon credits General Manager Will Guidara for instilling in him a dedication to uncompromising quality.

After three years at Eleven Madison Park, Eamon was approached to open a new restaurant in TriBeCa. After much consideration, he left Eleven Madison Park to open Compose in late 2010. As general manager at Compose, Eamon created the service and beverage programs and hired and trained the staff. After a brief closing, the restaurant re-opened as Atera in spring 2012, with chef Matthew Lightner at the kitchen’s helm. The restaurant received rave reviews and went on to earn two Michelin stars.

Later that year, Eamon dined at Frej, chef Fredrik Berselius’ Scandinavian pop-up restaurant in Williamsburg, Brooklyn, and was immediately drawn to Fredrik’s culinary perspective. After approaching Fredrik and establishing a friendship, the two planned the opening of the Scandinavian restaurant Aska, which debuted in the former Frej space. At Aska, Eamon managed the front-of-house and oversaw the beverage program, which included cocktails that employed a variety of progressive techniques and preparations including clarified milk punch and house-made oleo saccharums.

In late spring 2013, Eamon reunited with his former Eleven Madison Park colleague, chef Bryce Shuman to open Betony, a Modern American restaurant in Midtown. At Betony, Eamon oversees all aspects of the service program and is a constant presence on the floor greeting guests. Since opening, Betony has been the recipient of great critical acclaim, garnering three stars in The New York Times and Esquire’s “Restaurant of the Year” for 2013.

When not at Betony, Eamon enjoys cooking, collecting food and beverage-related books, exploring new restaurants, as well as biking and the performing arts. 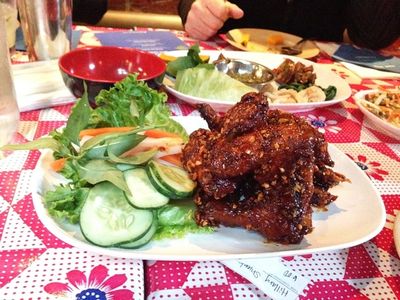 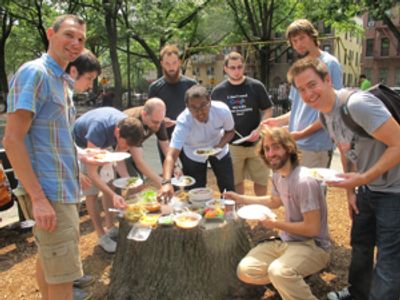 Podcast Episode 88: Where to Eat in New York City