Home > Experience the Flavors and Tastes of Kitchener Ontario

A Moto-Foodie in Ontario's Garden: Part 2

Moto-foodie Ken Aiken tells us about his food travels through Ontario, Canada. Part 2 of 2.

NOTE: This is part two of a two-part series. Fine part one here.

I roll out of the king-size bed, take a quick shower, and then stumble from my tent at Long Point Eco-Adventures and head to the communal one where there’s hot coffee and the breakfast chef d’jour. Norfolk County doesn’t have many hotels or B&B Inns, but my “glamping” site is probably the most luxurious lodging in the region.

Mounting my BMW K1200 motorcycle and riding west on Front Road I pass the Erie Wind Farm where the blades of 66 giant GE wind turbines are slowly revolving in winds coming off the lake. They’re as controversial here as they are anywhere, but I’m a fan of wind power and these generate enough electricity to power all the residential homes in the county—and they don’t destroy agricultural land in the process of doing so.

My first stop is the Backus Mill, an automated gristmill built from Oliver Evans’ design and completed in 1798. Evans’ automated mill—which could be operated by a single man—marks the beginning of the American Industrial Revolution and this one shows that the Norfolk County region produced sufficient grain by the end of the 18th century to support such a huge gristmill. While the clapboard siding has been replaced and the waterwheel restored, the interior is original, although it was “modernized” at some point after 1875 with the addition of rolling machines and an Otto natural gas engine. For me, the mill alone justifies the trip and I must have taken a hundred photos before reluctantly departing for my next appointment.

Despite being early in the season, the Simcoe Farmers’ Market provides me with a quick gauge of the vitality of local food production and community support for local sourcing. Located at the Norfolk County Fairgrounds, the interior spaces include commercial coolers for some of the regular vendors and outside the more seasonal stands are under tents or simply the back of trucks and SUV’s. I’m impressed by the quality of the meat offered by Townsend Butchers and Southern Pride Poultry advertises their chickens as “fresh killed.” Asparagus is in season, but other produce such as sweet peppers, cucumbers, and tomatoes may have been trucked in. However, this is an assumption since I’ve seen dozens of large greenhouses while riding across the county.

Soybeans are a major crop in this area. I pull into a very non-descript farm with a modern agro-industrial style building. This is Pristine Gourmet, a division of Persall Fine Foods on Villa Nova Road in Waterford. Jason Persall is the fourth generation to farm their 1,000 acres and he’s another agriculturist that figured out a way to add extra value to his crop. In this instance, cold-pressing oil from non-GMO sunflower seeds and soybeans grown on his farm. (The canola seeds are sourced from another non-GMO farmer in Ontario.) The virgin, cold-pressed oils that are produced in this building are sold to discriminating chefs across Canada and I learn that Pristine Gourmet has just begun to enter the U.S. consumer market.

Ted Willey of Norfolk County Tourism has arranged for lunch at the Blue Elephant in Simcoe. Heather Pond-Manorome opened the region’s first microbrewery in September 2012 and for foodies and craft-beer enthusiasts it must have been like discovering an oasis after being lost in the desert.

I’m suspicious of long menus, especially those that seem to offer almost everything. Locally sourced, fresh ingredients require a bit time to prepare and restaurant kitchen usually have a limited amount of space to work in. My suspicions prove to be groundless and both the food and beer prove to be very good. Heather certainly understands how to create return business and if I lived in this area I’d eat here several times a week.

The yellow and black signs with the radiation symbol in this long, narrow, and dimly lit corridor are not as ominous as they might seem. In the event of a nuclear attack the citizen of Simcoe can find refuge in these heavily reinforced “caves,” although Scott Jensen jokes, “bring crackers.” This is Jensen Cheese Company and the extensive walk-in coolers off this corridor are where their cheddar is aged. Started by Scott’s grandfather, Arne Jensen, in 1925 this is a family business. Their cheddar and mozzarella cheeses are made by hand, even down to vacuum wrapping and branding the 40 lb blocks prior to aging. They use a heat-treating process for their product rather than pasteurized milk, which destroys the natural enzymes that are essential to the aging process. Some cheddar is colored orange using the natural dye from the pulp of the annatto plant and their normal aging process ranges up to five years. The Extra-Old Cheddar is smooth, not crumbly, and there’s a little bit of grit from the calcium lactate crystals. It’s about as good as a block-age cheddar can be—although Scott has some really old cheddar hidden away.

The New Limburg Brewing Company in Nixon doesn’t have any beer for sale, but I sit down with Jo and Misha Gibbons, a father and son team who moved here from Belgium, and open a few test bottles of what turned out to be amazing brew. The Pale Ale and Pilsner will, I predict, become best sellers, although I prefer their Amber Lager. The Saison is quite intriguing, but the Vanilla Stout is by far the best milk stout I’ve ever drunk. Hopefully they will have their product for sale by 2015. Interesting things are being developed in Norfolk County.

Chef Ryan Rivard and his wife Jennifer Von Schleinitz opened The Combine in August 2013. This is what I came here to find: an innovative, world-class chef who is passionate about local sourcing.

No sooner have Ted and I been seated and I slip off to the kitchen. Which is where he eventually finds me in animated conversation with Ryan and sampling this and that. Leaving the line-chef in charge of the kitchen, we slip out back to inspect the garden and Ryan’s experimentation with specialty hot peppers and melons. A local farmer stops by and swaps duck eggs for some of Ryan’s pepper plants. I’m in heaven, but leaving Ryan to decide what to prepare for our supper, we go back to our table to savor a couple of signature cocktails developed by Jennifer.

Ryan brings me an almond and Parmigiano-Reggiano encrusted oyster mushroom topped with flamed tomatoes on a bed of arugula drizzled with maple balsamic vinaigrette as an appetizer—as if I hadn’t eaten enough in the kitchen. The main course he selects is roasted chicken breast with Taleggio cheese, shallots, potato, and bacon on a bed of asparagus and topped with his own tomato-ginger-chili jam. Naturally the menu changes depending on what is in season, but the blending of locally sourced and international ingredients matches my foodie philosophy and I only wish that I could cook as well as Ryan.

It’s my theory that the development of food-tourism destinations begins with local specialty food production, followed by the influx of creative chefs, then the establishment of B&B inns, and finally appearance of formal food tours. Norfolk County has the food and both The Blue Elephant and The Combine are the first of the innovative restaurants to appear in the region. A new hotel is being built on Long Point and the popularity of Long Point Eco-Adventures is growing. I expect we will be reading more about Ontario’s Garden in the near future. 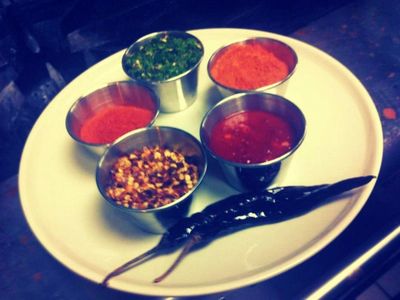