As Fall fell, we hosted a craft beer dinner at Meadhall in Cambridge with Wine Dine With Us and Boston Area Beer Enthusiast Society. It was an evening of great beer perfectly paired with delicious dishes.

At WineDineWith.us, we’ve been developing a thirst – and appreciation - for beer. When Seth Resler invited us to host the re-launch of Mystery Meet, we concluded that a craft beer dinner would be just the thing. Craft beer has become an ever-expanding force on the culinary/epicurean scene. To ensure the dinner’s success, we partnered with our beer mentor, Kristen Sykes, founder of BABES (Boston Area Beer Enthusiasts).

We chose Meadhall for a variety of reasons but primarily for the extensive selection of beers on tap. (That Meadhall also has a private dining room in which we could host the event was another factor.) And thus, on Sept.18th at 7:30 pm, on a “dark and stormy night”, an adventurous band of food and beer lovers gathered in that room for an evening awash in beer. To complement each course, Tyler Murphy, bar manager of Meadhall, and our co-host Kristen Sykes, created beer pairings for each.

The strong and spicy hop aroma of this Pale Ale (due to the late addition of hops in the brew) complimented well the spiciness of the garlic chili sauce in the mussels and the honey mustard sauce in the fried veggies. A highlight of this course was the broth that accompanied the mussels, which was divine!

The Scythe and Sickle - a Harvest Amber Ale - is a tribute to the fall harvest season and uses barley, oats, wheat and rye. The wheat paired well with the citrus zest of the pheasant and the piquant flavor of the rye was well matched with the jasmine rice. The Belgian yeast in the brew, a trademark of this brewery, really brought out the tang of the goat cheese.

This pairing was the best of the evening by far! The Imperial Stout with its notes of anise and slight heat from the alcohol of a mere (!) 10.2% were a perfect marriage with the cinnamony milk stout cookie. Also the creamy mouth feel of the stout was fantastic with the eggy Crème Brulee. Are we in heaven?!?!?

And so, our goal to host a craft beer dinner was realized – and we were awash in beer. This was decidedly a meet-up for the brew-centric. Each course utilized beer as an ingredient. Outstanding examples were: the tasty broth for the saison moules frites based on “Jack D’Or”; the deeply flavored butter sauce accompanying the pheasant using Wolaver’s Brown Ale; and the warm cookie containing Left Hand Stout. The pairings menu – created by our co-host Kristen Sykes and Tyler Murphy Meadhall’s bar manager was stellar. Some guests though went rogue and ordered what they wanted from the outstanding beer menu. For the beer aficionado, being at Meadhall is like being a kid in the proverbial candy store. We at WDWU raise our glass to our mentor Kristen Sykes for guiding us in all matters beer-related, Tyler Murphy for his good-natured and expert assistance and our server Matt who did a great job tending to the needs of a roomful of the thirsty. 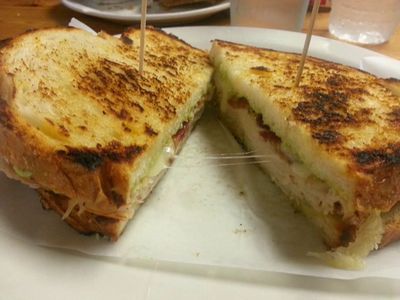