Moto-foodie Ken Aiken talks about his trip to the Vermont Cheesemakers Festival at Shelburne Farms.

On July 19th, I attended the annual Vermont Cheesemakers Festival, which is being held at Shelburne Farms just south of Burlington. The 3,800-acre property was created in 1886 as a Gilded-Era summer estate and progressive farm by Eliza Osgood Vanderbilt—granddaughter of Cornelius Vanderbilt—and William Seward Webb, a railroad magnate and financier. In 1972 the Webb family donated 1,400 core acres and three significant historical buildings to created a non-profit educational center for sustainability. It is now listed as a National Historic Landmark District and operates as a working farm.

After passing through the manned gate, and cruising down the dirt road, a grand Bavarian-styled castle comes into view. This, however, is not the main house, but the Great Barn with a walled courtyard that is two acres in extent. Built to house early 20th century agricultural machinery, farm workshops, and offices it now is the McClure Center for school programs, and independent elementary school, the farmstead cheese factory, an independent organic bakery, a furniture shop, and the farm’s administrative offices.

Winding across a landscape of fields and woodlands designed by Frederick Law Olmstead—the same person who designed Central Park in New York and Biltmore in Asheville, North Carolina—the main house (now the Inn at Shelburne Farms) finally comes into view. Set on the rise of Saxtons Point, the vista of Lake Champlain against the backdrop of the Adirondack Mountains is absolutely stunning.

Parking the motorcycle at the inn, I walk along the lakeshore to where canopies of white tents form a façade to the carriage house. Dr. Webb’s passion was the breeding of Hackney horses, which were esteemed for pulling carriages (hackneys were British carriages for hire, i.e. “hacks” or taxis). The extensive collection of horse-drawn coaches and hackneys that once filled the carriage house are on display at the Shelburne Museum, and the building is now used for special events, such as that which is taking place today.

Having been fortunate enough to get a special invitation to this sold-out event, I merge into the crowd with commemorative wine glass in hand. After all, what would a cheese festival be like without wine, and beer, and cider?

Vendors line the perimeter and center square of the main tents. Cabot Cooperative Creamery was front and center as the matriarch of Vermont’s fine food movement. Shelburne Farms own farmstead cheddar and their independent O Bread bakery were a given, as was Grafton Cheese Company. These companies produce award-winning cheddars and it comes as no surprise when people associate the state with this type of cheese. However, in the last decade there has been rapid growth of artisan producers who are creating varietal cheese that compete with the best Europe has to offer.

Goat- and sheep- cheese have edged close to popularity with that made from cows’ milk. The reasons are economic, scale, and consumer demand, but what interests me is that the range of products being created. Vermont Creamery seems to have their full line on display and Consider Bardwell Farm is here in full force. Willow Moon Farm is a mother/daughter operation in Plainfield. I’m partial to the garlic-herb spread made at Willow Moon Farm and manage to purchase the last available piece of traditional ash-covered goat cheese. I ask for Bismark (a hard sheep cheese) at the Grafton Cheese booth, but they only brought cheddar to the festival.

Being a fan of blue cheese, I seek out samples from Plymouth Artisan Cheese, Parish Hill, and the Bailey Hazen Blue from Jasper Hill. Each is distinctive and I can’t decide which I like better. Of course, this doesn’t stop me from sampling gouda, leyden, and soft-rind cheeses. I even discover a curd cheese made with nettle.

A glass half full is better than a glass totally empty. CROP (Customized Restaurant Operations Platform) Brewery), Fiddlehead Brewing, and Alchemist were on hand. Will Gilson poured me half a glass of CROP DIPA (double India Pale Ale) and I managed to score a half glass of Heady Topper before they were tapped out. The Alchemist produces Heady Topper, one of the top-rated beers in the world, and it’s nearly impossible to obtain unless you know where and when a delivery is being made of this extremely limited production brew.

Cheese and wine are a natural pairing and a few of Vermont’s fledgling vintners are pouring the fruit of their labors. Boyden Valley Winery, Lincoln Peak Vineyard, and Shelburne Vineyard —all partners in the new Champlain Valley Wine Trail—are exhibiting. Sipping a very pleasant white from Snow Farm Vineyard http://www.snowfarm.com/ in South Hero I can’t help but remembering what New York’s Finger Lakes Region was like in the 1990’s and Quebec’s wine trail has become. There is promise here.

Nouveau cider is not the same stuff we used to make at home. Sparkling cider is the rage and hard cider—that with an alcohol kick—began to become popular when Woodchuck Hard Cider showed up next to beer in local convenience store coolers in 2011. This Middlebury brand is now the best selling hard cider in the United States. Citizen Cider in Burlington appeared on the scene in 2012 and can’t expand fast enough to keep up with demand. Their Dirty Mayor—a local “in” joke—is made from apples grown at Happy Valley Orchard in Middlebury and has a bit of ginger added for zing along with an abv of 6.9%. This is the first time I’ve sampled their product and I’ll be purchasing it in the future. Shacksbury is a bit different in that it is a traditional Basque cider made from over 30 different varieties of apples grown, pressed, and fermented in Spain before being shipped to Vermont. Acidic and unfiltered it tastes much like old-time cider that had begun to “turn.”

Eden Ice Cider Company does make a sparkling cider that is dry and extremely pleasant, but I have a passion for ice ciders. First produced in North America by Christian Barthomeuf in 1989, ice cider has since become a world phenomenon. His vineyard and orchard, Clos Saragnat, is less than a mile from the Vermont border, so Albert and Lauren Leger didn’t have far to travel to learn the secret of its production. To my mind, their ice ciders are one of the premier liquids crafted in this state.

Whistle Pig in Shoreham is producing 10- and 12-year old rye whiskey. Smugglers Notch Distillery makes 3-year old rum aged in bourbon barrels, plus bourbon, rye whiskey, gin, and vodka. Saxtons River Distillery, which is actually located on Rt. 30 in Brattleboro, also makes bourbon and rye, but with a uniquely Vermont twist: they use maple syrup. I’m not going to switch from Islay whiskey, Kentucky Bourbon, or Polish vodka to these products, but everything has to start somewhere and this is a good beginning.

As to be expected, there are vendors presenting jams, mustards, pickles, breads, crackers, cookies, maple syrup, salsa, sausages, and candy. I’m looking for innovative products and am drawn to the table of Sugar Bob's Smoked Maple Syrup. Bob Hausslein of Londonderry takes pure maple syrup and infuses it with alder and beech smoke for 24 hours to produce a smoky sweet taste that is idea for BBQ or salad dressing.

Leigh Williams is another person who thinks out of the box even while putting her product into one. The owner of Laughing Moon Chocolates in Stowe, she has taken Bayley Hazen Blue Cheese from Jasper Hill and made a ganache filling for her truffles. She also makes a lavender and chevre truffle. Both are good, but her sea-salted caramels are perfection. Liberty Chocolates of Montpelier uses honey as their sweetener, but who else would have thought of using Heady Topper IPA, pretzels, and caramel to made a chocolate bar?

It has turned into one of the hottest and most humid days of the summer. Despite not having visited all of the vendors, I make my exit. Families are gathered in the shade on the lawn in front of the carriage house. Many have brought lawn chairs and blankets and are simply enjoying the scenery. The storms that swept through the region caused me to miss having breakfast at the inn, however I’m leaving replete after sampling so many fine Vermont products and spending a few hours at my favorite place in the state. 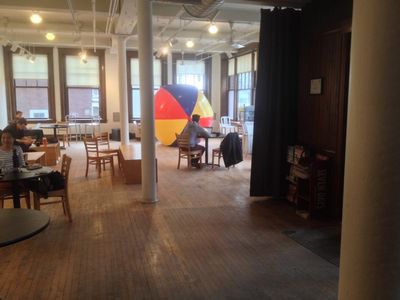