Mark Breitfuss' wife, Jan Marie Johnson, created Seattle Bites Food Tours of Pike Place Market in November of 2008 after visiting Italy and not being able to comfortably navigate their farmer’s markets and knowing we had a world-class market here in Seattle. She took a job in Los Angeles in 2010, and Mark took over running the business. We asked Mark a few questions...

1. What neighborhoods should foodies explore when they visit Seattle?

My first choice of course would be Pike Place Market. The Market is made up of a number of international talents (e.g., India, Germany, Taiwan, Indonesia, Turkey, etc.) to offering a great variety of foods: Uli’s from Uli’s Famous Sausages is a master German butcher; Cajetan from Saffron Spice is a classically-trained French chef.

The International District is a vibrant and diverse cultural area. It’s walking distance downtown, to the ferries, or to the baseball or football stadiums.

Uwajimaya Village, in the heart of the ID, offers one of the region’s most amazing shopping experiences in Asian groceries and prepared foods. Don’t forget your dim sum or congee for breakfast.

Belltown is just north and contiguous to Pike Place Market. It’s very trendy but still has that great northwest feel. I recommend to many of my guests who are looking for a unique drinking experience The Bathtub Gin – a true speakeasy in the basement of the Humphrey Apartments.

My wife and I love going to Assaggio Ristorante for our anniversary dinners. Everything you could conceivably ask for is available within the borders of this small neighborhood.

Ballard is a short drive from downtown Seattle and has a great Scandinavian charm. It’s located at Fisherman's Terminal, which is the home base to North Pacific Fishing Fleet. SeafoodFest is held annually in July and is a celebration of this heritage. Ballard also boasts its own Sunday Farmer’s Market year-round.

Capitol Hill was very stately in its early days and became the political center of the state. It earned the nickname of “Millionaires’ Row” during one area. It has a really diverse set of people and businesses. Nightlife is hopping with clubs, bars, and music venues, and you’ll often find coffee shops that moonlight as cocktail lounges.

2. Is there a best time of year for foodies to visit?

I don’t think one time of the year is better than the other. Seattle dining though, unlike Los Angeles or San Francisco, peaks early (7 PM) and slows down quickly after 9 PM – very easy to get a table at most restaurants on a Friday or Saturday after 9 PM throughout the year.

The weather is obviously great in July through September - and dining always seems most enjoyable when the weather is nice.

RELATED: See how well you know the food scene in Seattle? Take our quiz and find out!

3. Tell us about some of your food tours.

We are a small mom-and-pop business with one tour 10:30 AM tour daily throughout the year and additional 2:30 PM tours from May through September. We are known for our large portions made especially for our guests.

While the food and merchants on our tour are impressive guests tell us that our story of the Market is as impressive. We really get into the Market’s culture and promise our guests a real and emotional connection to the Market.

Our guests come primarily from recommendations or Trip Advisor (where we are the #1 attraction in Seattle) and they are sensational guests. They appreciate the passion we have for this small business and have been an absolute delight to tour with.

4. Who are some of the Seattle chefs we should keep our eyes on?

I have two chefs who are extremely talented. One I mentioned earlier –Cajetan Menendez. Cajetan is a classically-trained French chef from the institute of Hotel Management, Goa, India. He trained in India in 5-star hotels (Taj Group Hotel); worked with Carnival Cruises and did a stint with Tamarind Restaurant in NY and then to Seattle running a small stand in Pike Place Market called Saffron Spice. He is opening up Viddles Restaurant, in Belltown, right next door to The Rob Roy Bar.

He will offer Northwest cuisine, local wine, spirits and hand-crafted beers. His specialties will be local oysters, mussels, vegetarian offerings and what I think will be Seattle best classic burger.

Craig Heatherton is the head chef of TASTE restaurant in the Seattle Art Museum (SAM). His commitment to local is above anyone – they source from over 65 local producers (they visit and interview each vendor) and 92% of all their ingredients (including alcohol) are local (150 mile radius). The kitchen staff meets with the art museum’s artists every few months to find out what inspires them in their artwork that Chef Craig can reflect in his entrees and cocktails. Truly unique and exceptional food prepared perfectly. I guess you might call it “purposeful” cuisine.

RELATED: Top 5 brunch spots to eat at in Seattle

5. Tell us a bit of trivia about the Seattle food scene.

Seattle’s can be defined by its chefs’ personalities and the region’s agricultural bounty. The access Seattle has on the West Coast is quite amazing.

We’re able to source some of the best produce, meats and cheeses year-round, which has a direct impact on the whole food scene here. We also have amazing Northwest fish, crab, oysters, mussels, and of course salmon, all basically from our own back yard.

Seattle is not just about coffee even though while we are famous for coffee it is not a local ingredient – and the Seattle food scene is very much about local (not as much about organic). Western Washington is the 2nd and Washington state produces three-fourths of the nation’s hops — one of beer’s major ingredients — out in the nearby Yakima Valley. The city hosts several beer extravaganzas annually.

Gluten becoming really popular. Not everyone is offering the choice but many are transitioning and the choices have grown greatly in just the last year. It makes so much sense that Seattle has “Chef Farmers.”

Brian Scheehser of Trellis is a great example. He owns a restaurant in Kirkland and grows, preserves and serves vegetables, fruits and herbs from his 10-acre garden plot in nearby Woodinville.

Food trucks are on the rise but nothing like Portland. The jury is still out on how popular these will become. 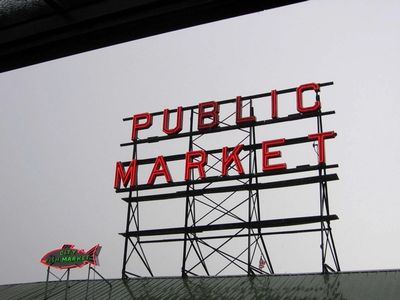